Yesterday I came across another pair of liberal posts on Facebook that bear no relationship to reality. 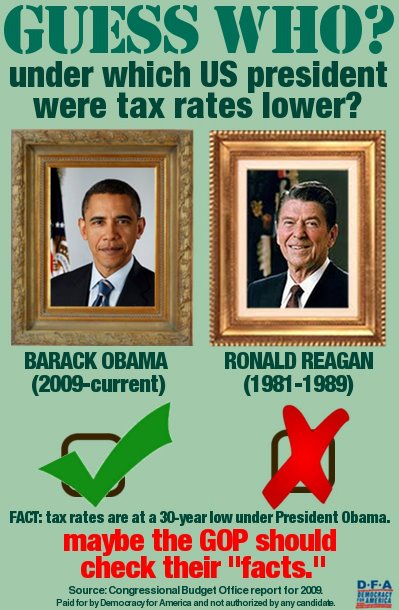 The first, from Howard Dean’s PAC Democracy for America, cites an unspecified 2009 Congressional Budget Office report to make the extraordinary claim that tax rates have been lower under Obama than they were under Reagan. The smug conclusion: “Maybe the GOP should check their ‘facts,’”

I did check the facts, which are available from the Tax Policy Center. The top marginal federal income tax rate when Reagan left office was 28%, down from an astounding 70% when he was elected. The top rate today is 35%, unchanged since Obama took office. Perhaps Democracy for America had some other tax rate in mind.

The second post was a Daily Kos article from back in January which claimed “the extraordinary abuse of the filibuster by the Republicans during the first 2 years of President Obama's administration is one of the major reasons, if not THE reason for his progressive legislation either being stymied or greatly watered down.”

If only this were true. So-called progressive legislation should be stymied. Unfortunately it wasn't: President Obama got every major initiative he wanted from Congress during his first two years. In 2009, he had a filibuster-proof Senate that passed several stimulus bills, along with Obamacare. The latter did have to be "watered down", but not because of anything the Republicans did. Joe Lieberman, an independent who caucuses with the Democrats, wouldn't support a bill with a public option. At the beginning of the second year, Scott Brown was elected, giving the GOP the 41st vote needed to mount a filibuster. It scarcely slowed the Dems down. They reconciled the Senate version of Obamacare with the House version using a parliamentary maneuver. Then they passed Dodd-Frank, with Scott Brown's support. Is all of this down the memory hole?

Incidentally, the gist of the Daily Kos article is the need to change the Senate rules to make a filibuster more difficult. I’m sure the Dems will change their tune after they lose the Senate in November. Then the Daily Kos will tell us – quite rightly – of the important historical role that the filibuster plays in maintaining checks and balances within our government.

Michael Isenberg is the author of Full Asylum, a novel about politics, freedom, and hospital gowns. Check it out at www.FullAsylum.com.
Posted by Michael Isenberg at 8:49 AM