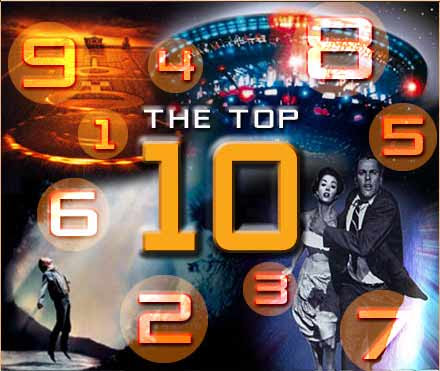 #10 Crate and Barrel only has crates; ran out of barrels.

#9 PA system has Alvin and the Chipmunks’ Christmas Song on continuous loop.

#5 Other stores are so bad, desperate customers actually go into the piano dealership.

#3 Only restaurant in food court is International House of Salmonella

And the #1 sign you’re at a bad mall: You find a parking space.

Posted by Michael Isenberg at 10:26 AM 0 comments

Today is the 71st anniversary of Pearl Harbor, so it seemed appropriate to review a movie about another surprise attack on the United States.

Red Dawn is, of course, a remake of the 1984 movie about Soviet forces invading America and occupying large parts of the country. The story of a gang of teenagers taking to the hills and fighting back captured the patriotism and unapologetic anti-communism of the Reagan era.

Fast forward to 2012, when Occupiers wear Che Guevara t-shirts and the nation has just re-elected a president who, if not a communist himself, had communists as the major influences in his life. To release a remake of Red Dawn in this environment is box office roulette. The mainstream media has been predictably harsh. In what’s getting to be a habit, Roger Ebert prostituted his artistic judgment to his political views. His review followed the same technique as his rant against last year's Atlas Shrugged, Part I: he savaged the movie on narrow technical grounds that don’t make sense if you actually watch the thing. Overall, review aggregator Rotten Tomatoes gave Red Dawn ‘12 an 11% rating, compared to 53% for Red Dawn ‘84.

This is too bad, because Red Dawn is the rare remake that's actually better than the original.

The small budget feel of the 1984 film, combined with the cast of peripheral Brat Packers (including Lea Thompson, Jennifer Grey, and Charlie Sheen) made it seem like a John Hughes coming-of-age comedy about a camping trip instead of the war epic it was supposed to be. There were two scenes that I especially didn’t like. In the first, one gang member, Robert (C. Thomas Howell), having shot his first deer, must drink its blood by way of initiation. In the second, the gang discovers that the enemy has implanted a tracking device in the mayor's son, Daryl (Darren Dalton). I thought both of these scenes should have played out differently. More seriously, the script was flawed dramatically: in a consequence-free plot, the small band of pubescent partisans had almost nothing to do with the larger war of resistance raging in the America beyond the kids' campsite.

In contrast, a plot-line in the 2012 version about capturing a critical piece of enemy technology put the kids in the game. The enemy this time was North Korea instead of Russia, and the movie captured the harsh reality of occupation. Improved battle choreography, better special effects, and more scenes of urban fighting added realism and grit. The cast delivered some intense performances. In particular, Thor’s Chris Hemsworth was thoroughly convincing as Jed Eckert, the combat-tested marine on leave. I wasn’t thinking Marvel Comics at all. Kudos also go to Adrianne Palicki for screen presence. The woman is hot and she knows it.

Oh, and those two scenes I didn't like in the original: they’ve been rewritten.

The one disappointment was the leader of the occupation, Captain Cho (Will Yun Lee). His 1984 counterpart, Colonel Bella (Ron O’Neal) was one of the most vivid characters in the film, and one of the few who showed real character development. 2012’s Captain Cho, by contrast, was a cardboard villain.

Still, the existence of villains is one thing that hasn’t changed since the 80’s. It’s still a dangerous world, and sometimes it’s necessary for men and woman with guns to stop the bad guys. Red Dawn is an entertaining reminder.

Michael Isenberg is the author of Full Asylum, a novel about resistance, freedom, and hospital gowns. Check it out on Amazon.com.

Posted by Michael Isenberg at 9:42 AM 0 comments

Here are some highlights from my interview with Terry Reiber. Terry talked to me about my novel, Full Asylum on his program, The Tea Party Show.

“There’s always the scene in the James Bond movies where Bond goes back to his hotel room and there’s a beautiful woman in his bed. Now, I’ve stayed at a lot of hotels, and this never happened to me, not once, but I thought, wouldn’t it be cool if it did? Wouldn’t it be fun to have this story about a young engineer, which is what I was when I first thought of this, who keeps getting himself into these kind of James Bond situations – he gets in a shootout or a car chase or he comes back to his apartment and his beautiful upstairs neighbor is in his bed?”

“A lot of it has to do with political correctness. Bond sleeps around, he shoots things, he blows stuff up, he used to smoke, he drinks heavily, and none of that is politically correct anymore.”

“One of the things I did try to do in this book is kind of capture the spirit of the early James Bond movies.”

“Who doesn’t want to be James Bond?”

“I wanted to have the heroine of the book be a lady wrestler. I thought that would be a fun thing to have.”

“When you don’t have freedom in your society, you lose the opportunities to excel.”

“If [Dinesh d’Souza’s movie] is about 2016, Full Asylum is ten years after that. What I project is continued loss of freedom, continued economic stagnation, a nanny state absolutely out of control, cameras in the cafeteria checking to make sure you don’t eat anything unhealthy, and I’m not even going to go into what I did with airport security, but it involves a privacy curtain and a rubber glove.”

Terry: Did you see some parallels between the future in your book and Atlas Shrugged II?
Mike: It’s very different because my book is a comedy.

“You cannot have a modern technological society with a high standard of living if you don’t have freedom.”

“If you look at history, capitalism, freedom, and the technological flowering that we’ve had in the last two centuries have all gone hand in hand.”

“The founding fathers that created this country were pretty smart guys and they designed a system that’s very difficult to destroy.”

“The years ahead are going to be rough. It’s definitely a good time for me to be starting a career as a dystopian novelist, but I do think that truth is on our side.”

“The reason that authors get so many rejection letters is they don’t do their homework: they don’t look for a publisher that’s a good match for their book.”

“The publishing world is run by liberals…nobody’s doing conservative and libertarian fiction…I decided I wanted to be the one that fills that niche, so I started the Monteferro Press.”

Terry: I notice your writing style is very visual…
Mike: That’s ‘cause I grew up watching television.

“Some of my characters, Cheri Tarte in particular, are far less polite than I am, so I can say things that I would never say in my own voice.”

Terry: I kind of like the hippie character a lot.
Mike: If you’re going to have any kind of stock character like a hippie, you have to have a twist, and in this case, he’s a hippie, but he’s a hippie for the Right.

And here’s the full interview…

Posted by Michael Isenberg at 8:45 AM 0 comments