With Obama You Get More—Regulations 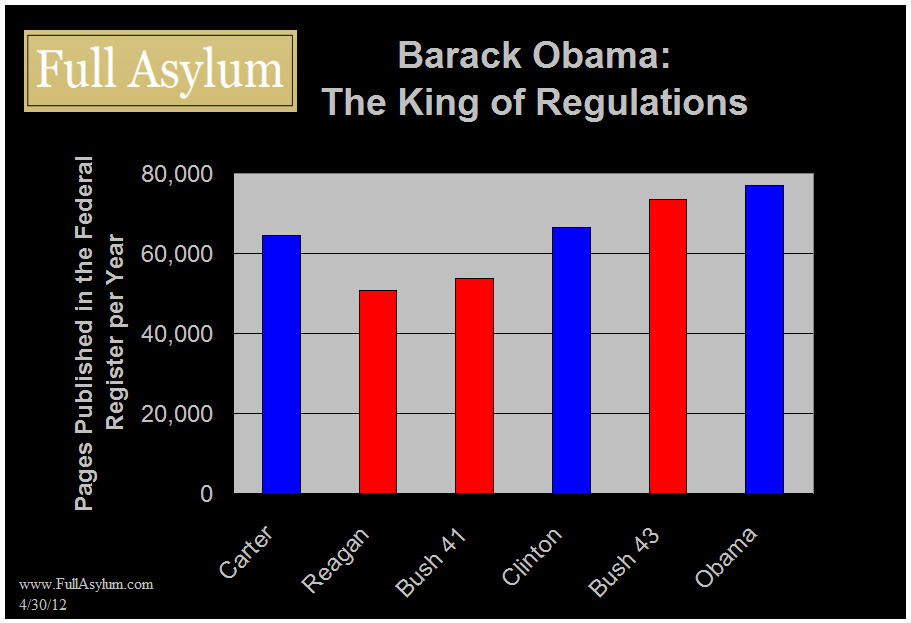 Barack Obama has added more pages of regulations to the Federal Register per year than any president in history. Could this have something to do with the painfully slow pace of the economic recovery?

Gracie for President: The Surprise Party Kicks Off its Presidential Campaign

George Burns and Gracie Allen radio show from February 1940 - Gracie runs for President. They covered pretty much every political joke you can think of.

Gracie: I'm running for President.
George: Gracie, How long has this been going on?
Gracie: For 150 years. George Washington started it.

Ted Nugent and the Secret Service 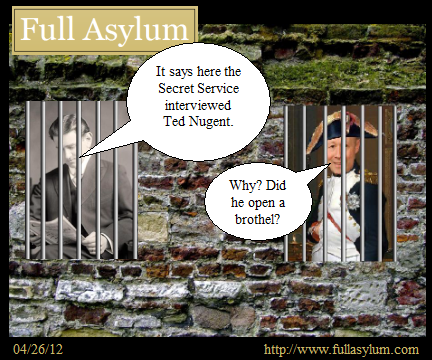 All kidding aside, last week a pair of Secret Service agents had a chat with rocker Ted Nugent after he said that if Obama is reelected, "I will either be dead or in jail by this time next year." Dedicated professionals just doing their jobs or official harassment of an administration opponent exercising his First Amendment rights?
Posted by Michael Isenberg at 10:06 AM 0 comments 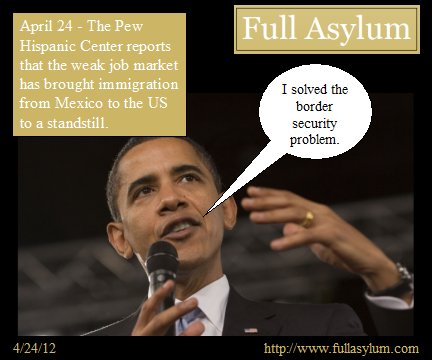 Posted by Michael Isenberg at 8:38 AM 0 comments 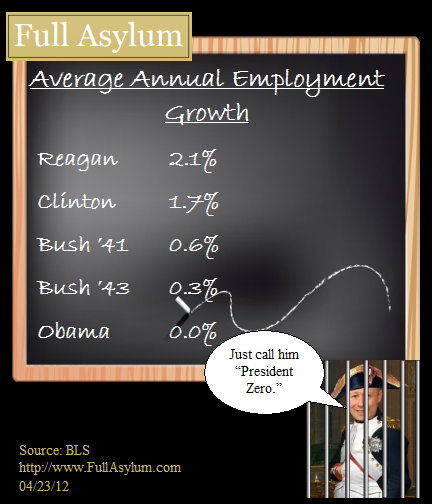 Posted by Michael Isenberg at 5:59 AM 0 comments


I was taking a walk yesterday (beautiful weather!) and discovered that the Occupy types had returned to Boston… 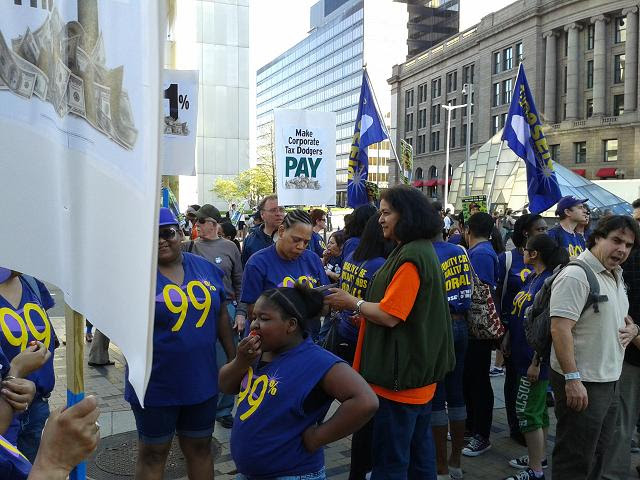 SEIU was out in force as usual. 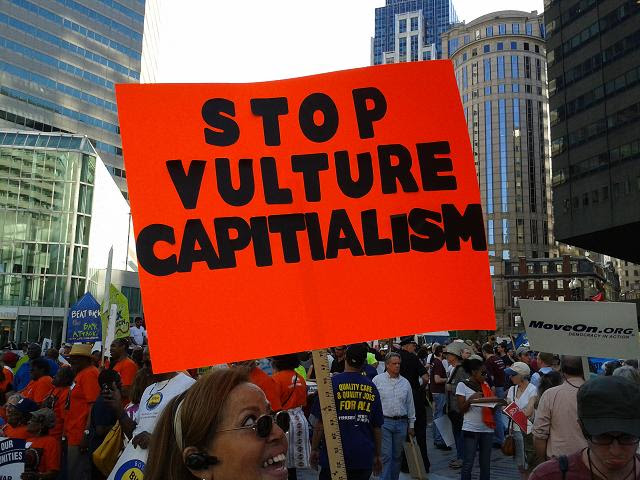 Great expression on this woman’s face, but she needs to learn to spell. 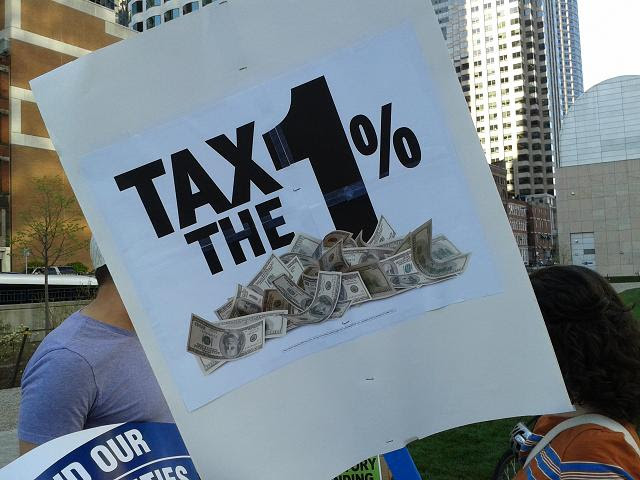 But this isn’t about class warfare. 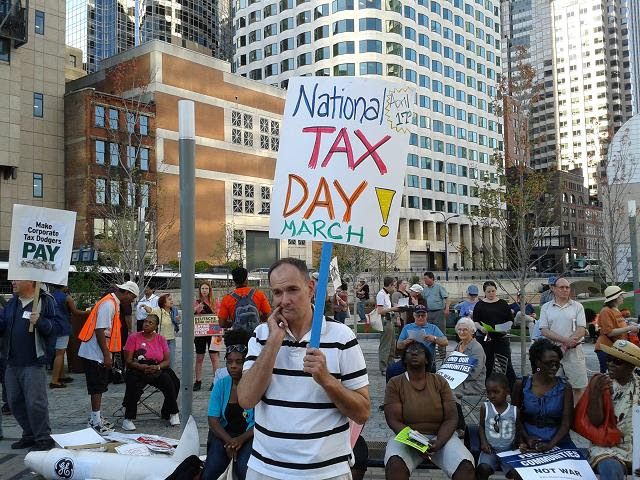 This guy is welcome at the Tea Party. 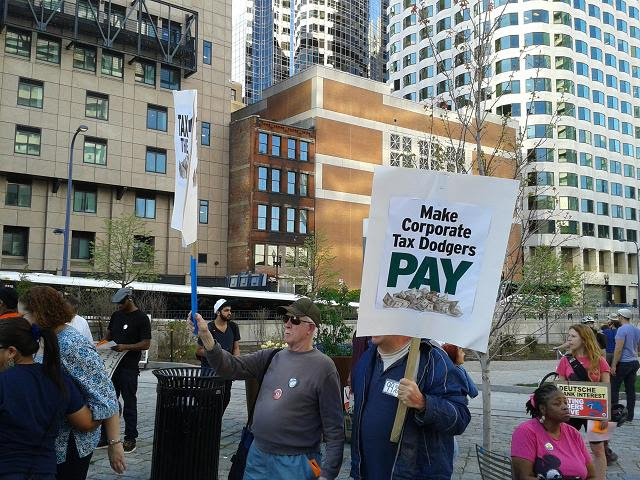 As I’ve mentioned many times, IMHO corporations shouldn’t pay taxes at all. Only individuals should pay taxes. 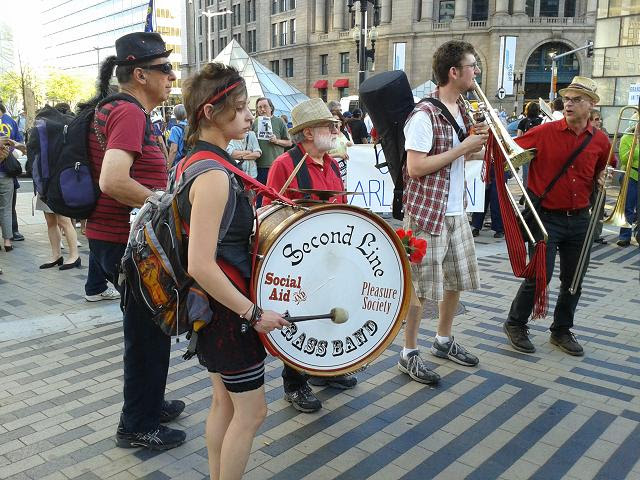 The band was actually pretty good. I still got “Down by the Riverside” going through my head. 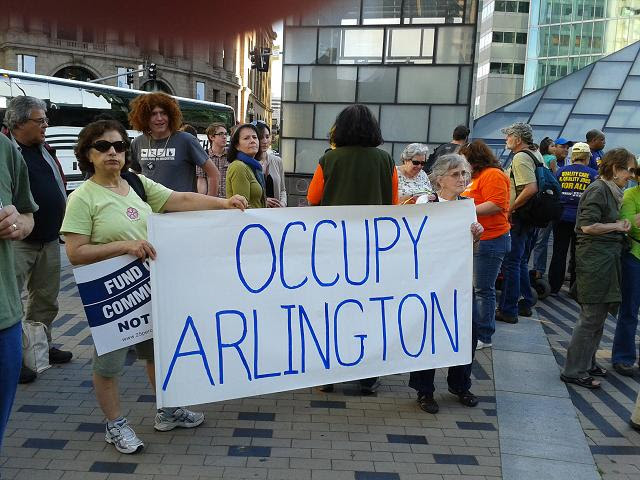 These people seem to be lost. Is that Carrot Top in the back? 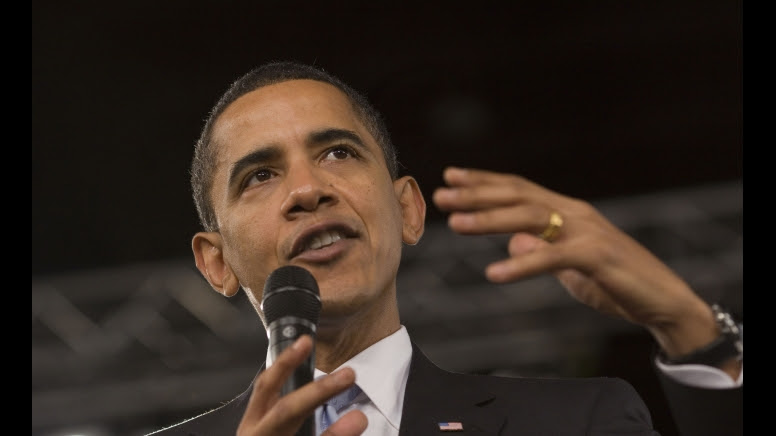 Has anyone else noticed the recent spate of news stories whose common theme is administrative incompetence by the Obama administration?


In each of these cases, the government was unable to control the people working for it. Some of these stories have humorous aspects, especially the one about the Secret Service. But there is nothing funny about the tragic deaths in Afghanistan, especially since they could have been avoided by better management of the materials taken from the prisoner’s library at Bagram.


As with any large organization, when things go wrong, the person at the top needs to be accountable. I do not for one minute believe that President Obama intended for any of these things to happen. He seems to be a more a less decent guy and I’m sure he is just as appalled as the rest of us at these incidents. But to paraphrase Hanlon’s Razor, never attribute to malice that which can be explained by incompetence. Therein lies the problem: The President is in over his head. He doesn’t have the administrative skills necessary to run the Executive branch. This shouldn't surprise anyone. At the time he threw his hat into the 2008 Presidential contest, he had never run anything bigger than a Senate office. It is unfortunate that the vacuum at the top is tainting the many professional and hard working members of the US Military and the civil service.


We learned too late that administrative skills matters.

Posted by Michael Isenberg at 11:34 AM 0 comments


As I’ve written previously, we shouldn’t lose sight of our State Legislatures amid the turmoil of Presidential politics. In addition to their impact on the quality of life in our states, our Legislatures draw Congressional districts and ratify Constitutional amendments.


Recently I attended a Meet & Greet with Jon Fetherston, who is stepping down as chairman of the Ashland Board of Selectmen to run for State Representative in the Massachusetts 7th Middlesex District (Ashland & Framingham). 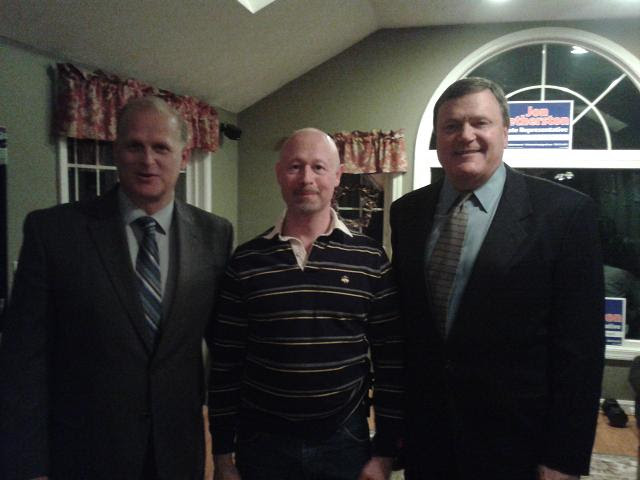 The author with State Rep candidate Jon Fetherston (left) and former Congressman Peter Blute (right). I should have dressed nicer.

Former Congressman Peter Blute kicked things off with a story about his own days in the State Legislature. After his initial excitement at being on Beacon Hill, checking out the House chamber and so on, he got his first phone call from an actual constituent. A ruptured municipal pipe was pouring sewage into the caller’s yard. Rep. Blute said he would be glad to help, but asked how come the caller had not called his local sewer commissioner instead. “Well,” the caller replied, “I didn’t want to start that high up.”


Jon spoke next. Between his speech and the discussion I had with him afterwards, I got a pretty clear idea of what he would be like as State Rep. It would be a full time gig for him, so he could give the Commonwealth of Massachusetts the same tireless effort he has been giving the Town of Ashland (among his other accomplishments, Jon says he was responsible for getting the potholes filled in front of the Market Basket. Since I drive by there every day, I’m grateful for that!) Cleaning up corruption on Beacon Hill is a priority for Jon. Last year the third House Speaker in a row was convicted of a crime; clearly corruption is a problem in the Bay State. Jon believes that just getting more Republicans into the House would help. Not that Republicans are necessarily better people, but they are only 20% of the legislature. One-party rule offers temptation to any political party.


You can find out more about Jon at www.jonfetherston.net. If you like what you see, please be generous with your time and financial support.

Posted by Michael Isenberg at 6:58 AM 0 comments 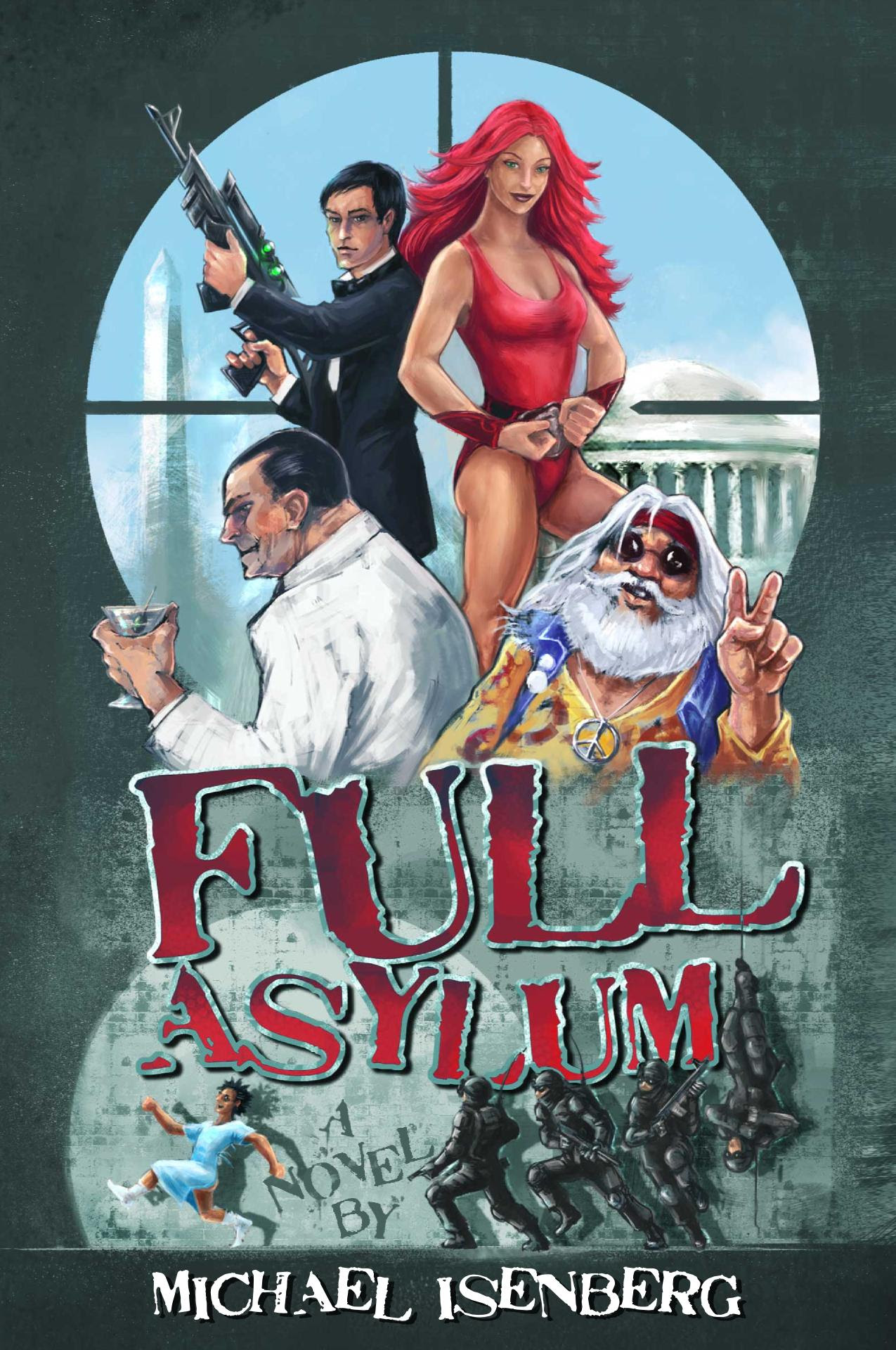