It's too early for the holidays! 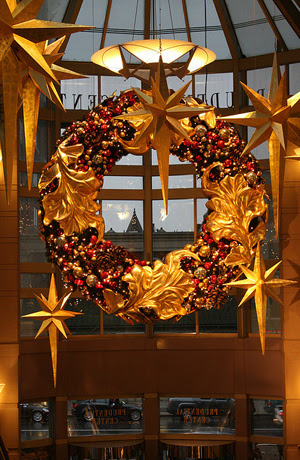 Still a week before Thanksgiving, but thanks to Hanukkah earliness, I have to start my holiday shopping while there are still leaves on the trees. I confess I find it hard to get into the spirit, in spite of the relentlessly cheerful Christmas songs being piped into the mall via the public address system.

The giant tree ornaments are hung from the ceiling, but probably without much care. I’m certain they were incompetently installed and will fall on some unfortunate shopper, crushing him to death. Not me, of course, because I’m careful not to walk under them. It might look a little weird, edging along the sides of the corridors, but I’m determined to survive the mall. Which I’m sure won’t be the case for some of those other shoppers, recklessly walking down the middle of the aisles, completely oblivious to imminent gold-painted death from above. And it might not be an easy death by squashing either. Some of those ornaments are snowflake-shaped - or maybe they're supposed to be stars; impaley death is a real possibility.

On the plus side, this early in the season there’s no line to wait for Santa. I told him what I wanted for Christmas, but he said he doesn’t do assassinations. Excuse me, Mr. Kringle, but I’ve been good all year. I know you’re aware of that, what with the seeing when I’m sleeping, and the knowing when I’m awake. You’re like the frigging NSA. Don’t try to deny it, it’s all in the song which they’re playing on the PA system for the tenth time today. So it seems to me that I’ve earned one little assassination. It’s not like I want something unreasonable, like keeping my health insurance policy. It doesn’t have to be anything fancy, either. Just wait for the target to come to the mall and drop a giant ornament on his head.