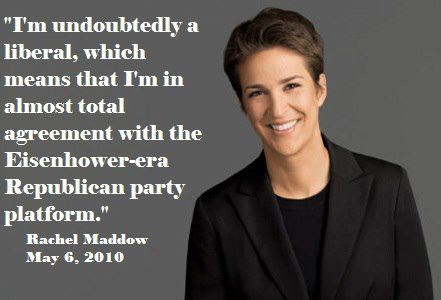 A meme has been making its way around the web featuring MSNBC commentator and Justin Bieber look-alike Rachel Maddow. She's quoted as saying “I’m undoubtedly a liberal, which means that I’m in almost total agreement with the Eisenhower-era Republican party platform.”

Leaving aside that Ms. Maddow would gleefully and wrongly pillory any Republican who embraced the Eisenhower platforms for wanting to bring back segregation, it's no secret that the party has become more conservative since the nomination of Barry Goldwater in 1964. Nevertheless, it's interesting to take a look at those old platforms. I suspect Ms. Maddow hasn’t.

The 1956 platform is a mixed bag. Ms. Maddow would no doubt applaud greater antitrust enforcement, expansion of the minimum wage, and a promise to fight employment discrimination. But she would be appalled by proposals to cut taxes, reduce government spending, invest in nuclear power, and counter “Communist aggression or subversion.”

But it’s the 1952 platform that’s really interesting. It reads like something that Thomas Jefferson wrote about King George, or maybe a Facebook post by that guy from the Tea Party who keeps telling us to write in the ghost of Ronald Reagan instead of voting for “Obamney." Check out these excerpts from the preamble:

Michael Isenberg is the author of Full Asylum, a novel that shows what happens when government arrogantly deprives its citizens of precious liberties. Check it out on Amazon.com.

Posted by Michael Isenberg at 9:28 AM