To my Ron Paul friends 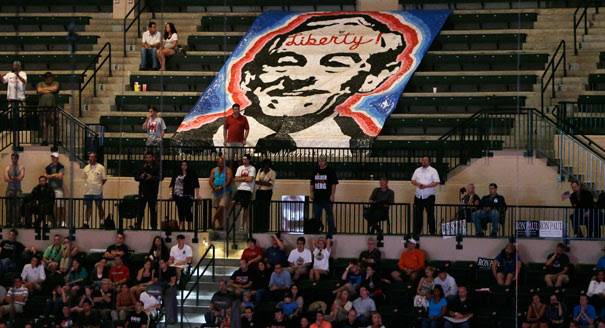 To my Ron Paul friends:

You know I love you all.

You know I think you’re the future of the Republican Party.

You know I think the GOP Establishment acted swinishly, and with little regard to its own interests, in overturning the results of caucuses, after you worked your butts off to learn the rules and get chosen as convention delegates, fair and square.

I didn’t vote for Romney in the primaries either. But Barack Obama threatens the freedom that is the core of our political philosophy. It’s time to work together to toss him out on his ass. If we don’t, the prediction I made in my novel Full Asylum of armed government CREEPS in black body armor kicking in our front doors may very well come true.

Does Romney offer everything we want? No. Can we tell the difference between him and Obama on the issues that are important to us? Absolutely. Obama has grown the government to a level unknown since World War II: Washington now spends 25% of GDP. Romney promises to claw that back to less than 20%. Obama has put more pages of new regulations in the Federal Register per year than any president in history. Romney promises to roll them back. And while Romney may not want to End the Fed, he does promise to replace Bush/Obama appointee Ben Bernanke with a chairman who will exercise some restraint in running the printing presses.

Will Romney keep these promises? I don't know. But we’ve seen how Obama governs; we know from experience what he’ll do if he’s re-elected. No, Romney may not keep his promises, but that’s the way to bet.

So please give Mitt your support. I know you won’t join me in taking Ron Paul to task for his classless refusal to do so. But at least stop tweeting that you’re going to vote for Obama. Obama? Seriously? The guy who spends his life trying to think up ways to get around the Constitution?

Also, please be polite. Do not support displays like this one that occurred on the convention floor yesterday:

Reports are conflicting. But as best I can reconstruct it, Ron Paul supporters, rightly angry that some of their delegates wouldn’t be seated, tried to shout down Committee on Permanent Organization chairwoman Zoraida Fonalledas as she began to present the credentials report. Romney supporters responded by drowning out the Paul supporters with shouts of “USA!” Because Ms. Fonalledas happens to be Puerto Rican, the net result was a lovely bit of video that the Democrats are already using to reinforce their fabricated “Republicans are racist” narrative. Giving ammunition to the enemy doesn’t help our cause.

I leave you with a question: Politics is the art of the possible. What is possible in 2012?

Michael Isenberg is the author of Full Asylum, a novel which shows what America will look like if Obama is re-elected. Check it out on Amazon.com.

Posted by Michael Isenberg at 8:37 AM