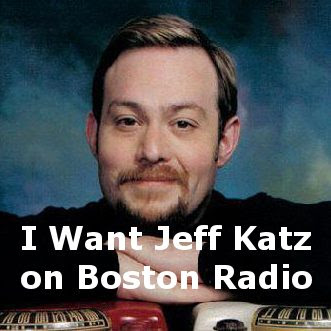 I was very disappointed to tune my radio to Boston’s WXKS Talk 1200 this morning and not hear the always-cheerful voice of Jeff Katz. According to the Boston Herald, “Boston’s conservative talk radio underwent a major shakeup yesterday as Rush Limbaugh announced he is leaving WXKS-AM and heading back to WRKO, and ‘Talk 1200’ yanked local talkmeisters Jay Severin and Jeff Katz from its weekday lineup….‘As a policy, and out of respect for the individuals, we don’t discuss details of personnel matters,’ said spokesman Joe Mazzei in an email.” I spoke with Dylan Sprague, operations manager for Clear Channel Boston, who confirmed that the station had changed its line-up and said to stay tuned for its future plans. The schedule on WXKS's website shows “America Now with Andy Dean” in Jeff’s timeslot.

I’m sure Andy is a good guy, but Boston needs someone local. Jeff has been a great friend to the Greater Boston Tea Party, and has built the best forum in the area for good conservatives like 4th District Congressional candidate Sean Bielat to get their message out. It was on Jeff’s show that I learned the inspiring story of Arlington High student Sean Harrington’s epic battle to restore the Pledge of Allegiance to his classroom. If you want this kind of programming to continue to be the soundtrack for your morning commute, please email WXKS (feedback@talk1200.com) or better yet, call (781-396-1430) and tell them (courteously) to “Bring back Jeff!”

Added later: Please note the comment from raccoonradio below: "Or you could e-mail or call WRKO AM 680 or WTKK FM 96.9, who could put Jeff in weekends or fill-ins at least. Jeff used to work for RKO."

Michael Isenberg is the author of Full Asylum, a novel about politics, freedom, and hospital gowns. Check it out at www.FullAsylum.com.
Posted by Michael Isenberg at 8:33 AM