Yesterday I attended a demonstration at the British Consulate in Cambridge to protest the arrest in London this week of Wikileaks founder Julian Assange—and had a run-in with Antifa. 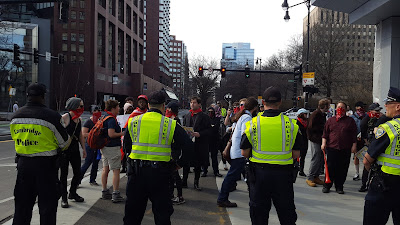 Wikileaks, according to its website, “specializes in the analysis and publication of large datasets of censored or otherwise restricted official materials involving war, spying and corruption….a giant library of the world's most persecuted documents.” Among the persecuted documents it has published since its beginnings in 2006 have been emails by Sarah Palin, evidence of bias by East Anglia University climate change scientists, the “Collateral Murder” videos of US helicopters killing Iraqi civilians, and the Democratic National Committee emails showing that party officials favored Hillary Clinton over Bernie Sanders during the 2016 primaries, in violation of party rules. Wikileaks has proven itself to be truly non-partisan.

Needless to say, the US Government has had it in for Mr. Assange. Since 2012, he found asylum in the Ecuadorian Embassy in London. However, the government of Ecuador rescinded his asylum this week. He was dragged from the embassy by British police, for extradition to the United States.

Like Wikileaks, yesterday’s rally was non-partisan. I had been invited by my friends at the Libertarian Party. Once there, I ran into some Republicans I know, as well as Bitcoin activists, anti-corporate and anti-Fed protesters, and 2018 independent Senate candidate Shiva Ayyadurai. It was a small group, so I was happy to see some two dozen Antifa demonstrators show up with red banners and matching bandanna/facemasks. I thought this was a great opportunity for organizations which normally oppose each other to reach across the political divide and work together on an issue where they share common ground. 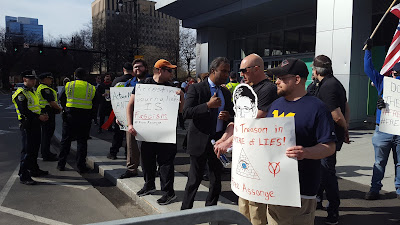 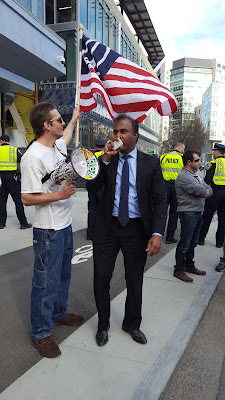 So imagine my surprise when I discovered that Antifa was there to counter-demonstrate.

Indeed, I was mystified. I thought that the self-styled “anti-Fascist” Antifa, who see themselves as rebels, would have been a natural ally for the anti-Establishment, anti-war Wikileaks. Yet there they were, with cowbells and vuvuzelas, trying to shout us down and taunting us about how they “ruined” our demonstration and caused us to waste our Saturday. They called out some of the pro-Assange demonstrators by name, as if to intimidate them by saying, “We know who you are.” Not knowing my name, they called me "Dad," having mistaken me for the father of one of the other protestors. I responded by warning them that they better not mess with my boy.

In this clip they chant “Go home, Nazis” at us. Since libertarians take the opposite position to Nazis on every issue there is, and some of us are Jewish besides, I suspect Antifa doesn’t actually know what a Nazi is.

It was all rather childish, really. At a couple points, they chanted “Free Chelsea Manning”—who was a Wikileaks contributor. Like I said, mystifying.

Shout out to the Cambridge Police, who came out in force to keep the opposing sides apart and ensure that things stayed non-violent. Thank you! There was however, a downside to that, as I would have liked to politely engage the Antifa demonstrators, and learn just what the hell they were thinking. Sadly, the police stopped me when I tried to do that.

Posted by Michael Isenberg at 5:02 AM 0 comments