The wedding caused a certain amount of controversy; I’m not sure why. I know what Nabors does is icky, but a person shouldn’t be prevented from getting married just because he’s an actor. Lots of actors are in loving, committed relationships. If I thought about it, I’m sure I could come up with two or three actors who haven’t been divorced since before Christmas. 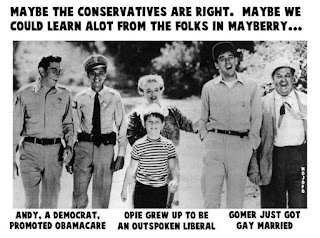 The Nabors/Cadwallader nuptials led to some snippy celebration in liberal venues, including a Facebook page called The Politburo of Teabilly Mockery, whose profile picture consists of Lenin wearing Mickey Mouse ears. You can’t make this stuff up. The Politburo posted this photo of the Andy Griffith Show cast with the caption “Maybe the conservatives are right. Maybe we could learn a lot from the folks in Mayberry…Andy, a Democrat, promoted Obamacare. Opie grew up to be an outspoken liberal. Gomer just got gay married.”

I was planning to write a diatribe pointing out that it was not Andy, Opie, and Gomer who did these things – it was the actors who played them. I thought it would be a useful educational service to explain to liberals the difference between fantasy and reality. I know they have a big problem with that, which is why their policies never work.

But then it occurred to me that I could not recall any conservative ever actually saying that we could learn a lot from the folks in Mayberry. Just to be sure, I checked the indices in every volume of my library, which consists entirely of the works of Ann Coulter and Rush Limbaugh. No mention of Mayberry. I also checked for The Andy Griffith Show, conservative values on TV, and Otis the town drunk as role model. Nada. I could have tried Google as well, but I had already done almost four minutes of research. What am I, a research machine?

I’m not surprised by the results of my in-depth study – which I submitted for publication to the Journal of Media Sociology and Backyard Distillering. I can’t really imagine a conservative warming to Mayberry. For one thing, Andy Griffith’s character, Sheriff Taylor, was always sitting on the porch playing folk music on that guitar of his. Hippie freak.

Also, he was soft on crime. Did he have any clue how dangerous it was leaving the keys to the jail hanging where the criminals could let themselves out? Once they got out, good luck getting them back: he didn't carry a gun! His deputy, Barney, played by Don Knotts, carried one, but then Andy would only let him have one bullet and made him keep it in his pocket. I’m sure that one bullet was the only thing standing between Mayberry and a total collapse of civilization.

Knotts left the show mid-run – I believe to pursue his dream of starting a berry farm – and I didn’t watch any of the episodes after that because Barney was the only character who was funny. Let’s face it: without him the show was the Family Circus of sitcoms. But I have no doubt rioting broke out in the streets of Mayberry. Also looting. I bet Aunt Bee joined a tough gang of seniors smashing the window on the TV & Repair place next to Floyd’s Barber Shop and helping themselves to that cutting edge 12” black and white set that was always on display. Then Andy, explaining that "You never want a serious crisis to go to waste," declared martial law and sent the fat little mayor with the speech impediment to the gulag. No keys on easily accessible hooks there – that’s how real commies work once the civilian authorities have been swept aside.

Clearly this idea that conservatives want to remake the country in the image of Mayberry is another liberal fantasy. They should get some help with that.

All kidding aside, congratulations and best wishes to Jim Nabors and Stan Cadwallader as they move into the next phase of their life.

Posted by Michael Isenberg at 7:59 AM